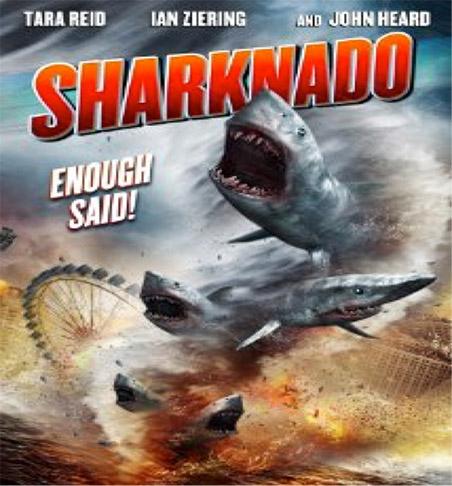 This is the poster for Sharknado

How can a hurricane become even more terrifying? All it takes are a few vicious man-eating sharks.

A hurricane pulls sharks out of the ocean through three waterspouts (tornadoes over water). As they go over land they become  tornadoes, causing havoc in the city of Los Angeles.

Ian Ziering who plays Fin Shepard, is trying to save his daughter Claudi and ex-wife April Wexler. They don’t want his help and think they can survive on their own. Once they see a man get eaten by a shark, however, they admit they could use some help.

They remember their son Matt’s flight school on the coast. Together get to the school and try to stop the tornadoes with explosives in order to balance the cold and hot air causing the tornadoes.

Rotten Tomatoes gives “Sharknado” a rating of 91%. Jacqueline Andriakos from Entertainment Weekly says, “With few tricks up its sleeve, Sharknado only adds to the list of hysterical Science Fiction monster-dramas that make for a shamelessly brainless 90 minutes well-spent.”

This is a movie where bombs are dropped into tornadoes and a sharks get cut in half  with chainsaws. A woman developed a crush on Fin but then fell in love with his son. Throughout the movie you thought people were going to die but they survived through it. If nothing else, the suspense makes “Sharknado” worth it.