Catch Me If You Can: In Review 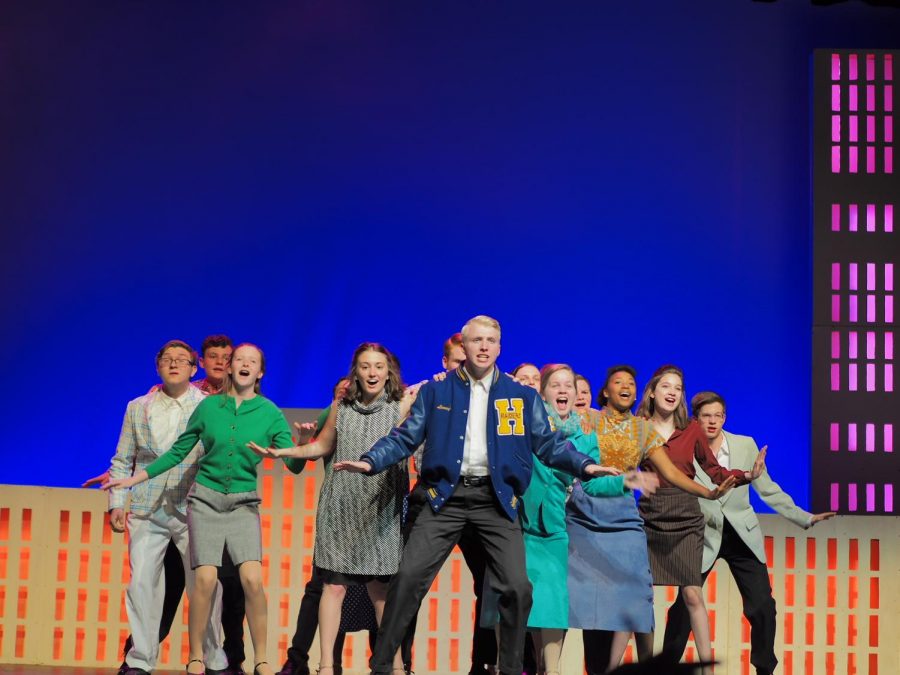 The cast and crew did a great job with the spring musical according to those in attendance. Catch Me If You Can ended with standing ovations and brought a new musical to our area. Though many were familiar with the movie version, few had seen the musical.

Holly Bradshaw said, “Personally, I really loved the set and costumes a lot. The set did a really good job using different lights to establish the mood and location the characters were in while simultaneously establish the emotions of said number or scene in the musical.” Hadley Rosengrant noted, “The lighting was really impressive.” Emilee Lamps thought that “the set was amazing.”

Most students raved about Justin Peel, Michael Willis, and Regan Harris’s performances in a recent poll. Maddie Moe said, “I always really enjoy the singing and dancing, but some of the acting was really good as well.” Julia Pimmel thought that “Reagan Harris’s ‘Fly Away’ performance was spectacular, but I also really loved the tap dancing cop number.” Shelby West agreed. “I’ve listened to the musical soundtrack, and I think that the BJ performers did as well or even better music-wise.” Aaliyah Coe said, “Detective Hanratty [played by Michael Willis] in my opinion delivered the most impressive performance. His mature voice along with his dance skills really amazed me.” Emma Leigh Wright thought that “Justin did a really awesome job playing his character Frank.”

Even though it received rave reviews, the perfectionist cast and crew noted some of their trials and tribulations. Dalia Altubuh shared some of the backstage secrets. “Today, a gun misfired. The FBI agent, J.D. Willis who fired it did an amazing job at improving. It started with him saying, ‘I’M GONNA SHOOT! and then it clicked, signaling a misfire. He then (he’s the more comedic FBI agent) said, ‘Ah, I forgot to load it again!’ You would have never known that there was a problem with his gun. Backstage, the techies had to attempt to fix a desk (named Big Bertha) that’s casters broke onstage. Then a bird came in out of nowhere. We managed to catch it- with the aid of several fans, a broom, a giant desk, several blankets, and a Mr. Craft.”

The cast attributed hard work to the musical’s success. Sija Headrick said, “Our cast worked so hard to create this musical. It is always hectic backstage with thousands of mic changes and feature dancers running for a costume change. But, there is also just us hanging together doing something we love. Sometimes we’ll dance in the wings when our favorite dance or song numbers come on and we’re not in it (at least, I do anyways). It’s a good experience and a lot of fun even if you do have a small role as the bank teller and the O-negative Nurse (or as I like to say, Nurse 4000). I hope everyone enjoyed it because that’s what we all wanted.”

The end of the musical production was bittersweet. Kafui Sakyi Addo shared what she’ll miss most. “The closeness of the cast. By the end of this nine month journey, all of us had gotten so close, and the last performance was beautifully heartbreaking. Sitting in the audience and seeing what we had worked so hard for, and then watching people enter on stage for the last number of the show with tears in their eyes was the thing that broke me. We all got so much closer than we thought we would.”