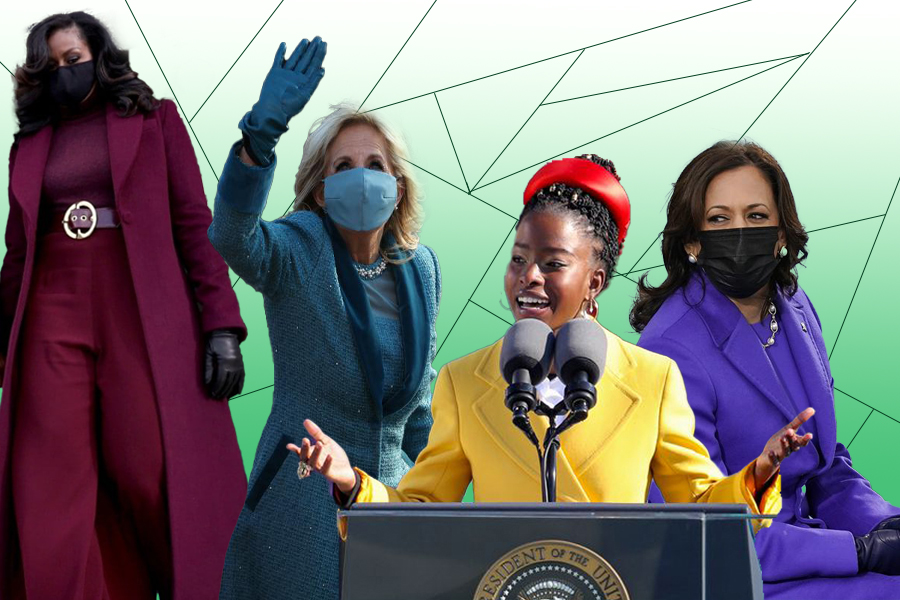 With the COVID pandemic keeping many people indoors, wearing new and stylish outfits, and always looking your best has recently been placed on the back burner. However, this means that whenever there is an event, people are bound to show up dressed to the nines. The Presidential Inauguration Ceremony is no exception.

Many high-profile celebrities showed up, with such notable faces as J-Lo, Lady Gaga, Garth Brooks, and more. Many former Presidents showed up as well, including Barack Obama, Bill Clinton, and George Bush. However, they were not the ones who caught the public’s attention.

Michelle Obama stood out from the crowd wearing a monochrome wine-red outfit with beautifully styled hair. She also had a large belt with a gold buckle, black gloves, and a black mask which completed her stunning look perfectly.

First Lady Dr. Jill Biden was sporting a sky-blue dress and overcoat with a darker blue velvet trim around the neckline and sleeves, along with a short necklace seemingly attached to the dress itself. But, what really sealed this style’s deal was the matching blue gloves and mask.

Vice President Kamala Harris’s look was seemingly predicted by the Simpsons! She was wearing a dark purple dress and overcoat, similar to Dr. Biden’s, and was wearing pearls along with dark purple gloves and a black mask.

Another notable outfit was that of Amanda Gorman, who recited the poem during the inauguration at just 22 years old. She had on a long, bright yellow coat and had pops of red throughout her look. She was wearing a bedazzled, bright red mask with a bright red hairpiece to match it and complete her now, iconic look.

Other notable outfits include J-Lo’s and Lady Gaga’s, two of the performers during the ceremony. J-Lo sported a long and flowy white look and Lady Gaga had on a stunning black gown with a puffy red skirt and a golden bird brooch. Both of their performances were as incredible as the outfits that accompanied them.

Another person who has caught the eye of the public is Bernie Sanders. His look is by far one of the most liked, though it’s not for the amount of glamor he had at Wednesday’s inauguration. Bernie was photographed all bundled up for the cold weather, wearing his signature jacket and a pair of patterned mittens, and has been thoroughly meme’d.

All of the outfits on display at the inauguration were definitely something that brought a little fun into politics, especially since it has become more of a heated topic.