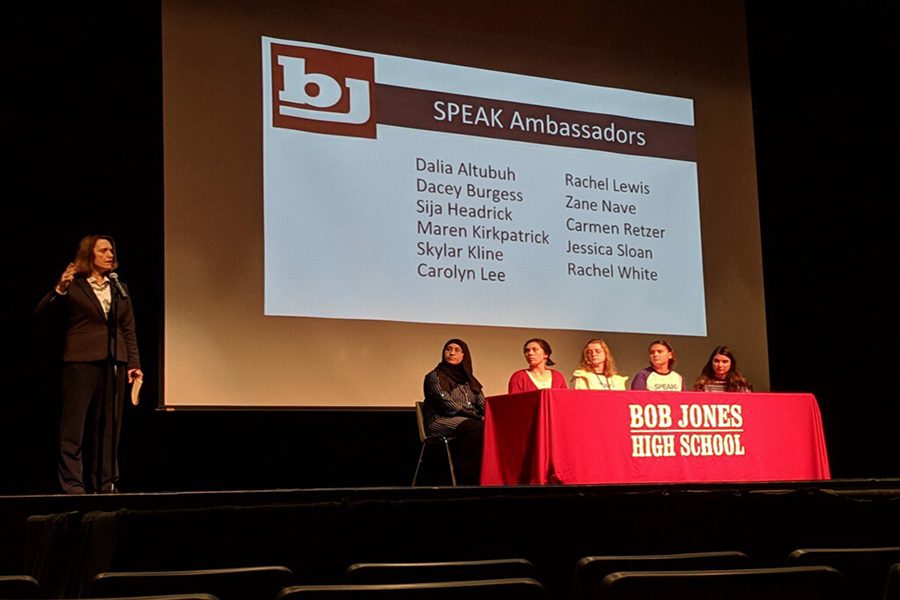 SPEAK Panel on the day of the teachers' back to school professional development.

Nationally, suicide is the third leading cause of death of teens aged both from 10-14 and aged 15-24.  Unfortunately, the statistics could have been far lower as 90% of teens who have attempted suicide have a treatable psychiatric disorder. With such alarming statistics, suicide prevention is an issue to be taken seriously. SPEAK Ambassador Jessie Sloan said, “It’s joked about and not taken as seriously as it should be,” and went on to say that mental health is often a silent battle and that SPEAK brings more awareness to it.

The SPEAK ambassadors received monthly training from professional organizations like the Caring House in order to help raise awareness and to direct students to community resources. They also completed an online course through Little Big Fish’s Incognito simulation training. Currently, the club has 11 members and has hopes to grow. Ambassador Dalia Altubuh said, “I wanted to be a person that people could go to.” Rachel White said, “I love being able to help people who think that they are beyond help.”

The ambassadors stressed that teachers remind students of what they’re good and to be supportive of student interests outside of academics. They also stressed reframing failure as a normal part of the learning process. Even reminding students that teachers do have time for each of them can be helpful. Ambassador Maren Kirkpatrick commended the teachers she had witnessed showing compassion to anxious students during class presentations and extending due dates for stressed out students.

Ambassador Carmen Metzer said, “Bob Jones is such a rigorous academic school. Anxiety seems to be a trend. The culture of perfection… The stress and focus on grades can cloud everything else.”

SPEAK ambassadors are working on ways to be more identifiable to the student body at large. They also encourage everyone to download the SPEAK app. This app has an interactive risk factor inventory and directs users to professional community resources and hotlines.

Anyone interested in learning more about helping others in this area should consider signing up for the Patriot Path of HOSA Suicide Awareness presentation in early February.