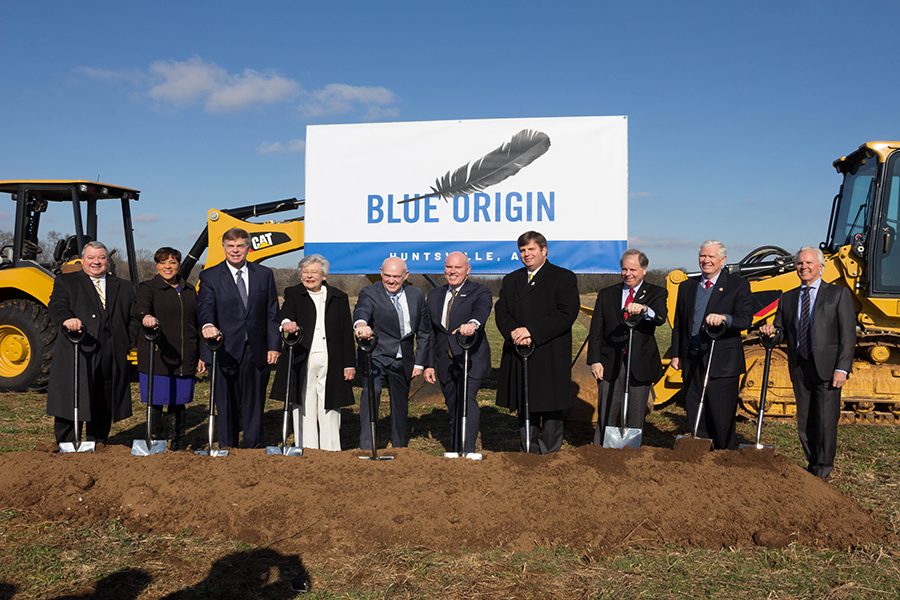 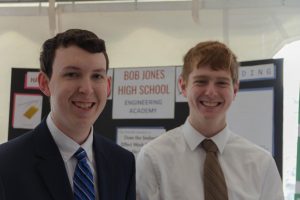 The factory, slated to employ more than 300 people, will produce Blue Origin’s BE-3U and BE-4 engine. Currently, both the BE-3U and the BE-4 are in design and test stages.

“BE-4 will be applied to different vehicles, the Vulcan rocket, being developed by ULA, as well as what we have on New Glenn. There will be two on the bottom of Vulcan as well as seven on the bottom of New Glenn, totaling almost 4 million pounds of thrust at liftoff. One advantage of this engine is that the cycle runs a little cooler, therefore you can reuse this engine, which allows us to design it to be reused 25 different times,” Blue Origin CEO Bob Smith said. 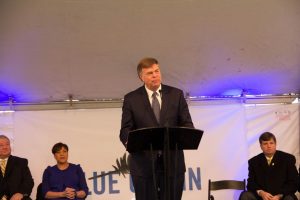 Rocket reusability has become much more viable in recent years. Companies like Blue Origin and SpaceX have become trailblazers in more economically viable rocket designs, which save costs by recovering some of the most expensive components of a rocket, chiefly the engines.

Reusability aside, the Blue Origin plant is a major step for Huntsville, too.

Huntsville Mayor Tommy Battle stated, “This is a huge presence, because this is manufacturing. We will start manufacturing the BE-4 and BE-3 engine, which will take the Vulcan rockets, and that’s very exciting for us. We’ve always been the think tank for rockets, but now we’re getting into production, and that’s a great thing. We can carry it from the dream, from inception, to design, engineering, and all the way to production.”

The announcement and construction of Blue Origin’s engine factory comes as a part of the state’s Made in Alabama initiative, touting massive economic growth and many multi-national corporations who have already chosen to make Alabama their home, including Airbus, Honda, Mercedes, Hyundai, and BASF, just to name a few.

“When we talk about building success and momentum, here’s what we mean. We share with companies our unparalleled workforce, we provide a positive, business friendly environment, that encourages success and growth. We show companies that if they want to be made in Alabama, they can expect excellence,” Governor Kay Ivey added, “The engines built in this facility will be game changers, not just for Blue Origin, or the state Alabama, but for companies around the globe and certainly throughout our nation. It was here in Huntsville, AL that we built the rocket that took man to the moon and returned him safely. The United States is no longer going to be dependent on other countries.” 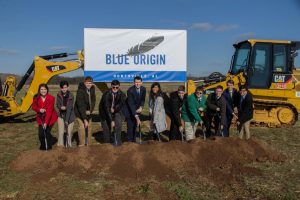 Bob Jones students shovel the dirt at the groundbreaking.

America’s reliance on foreign entities in the space industry has been a major issue, according to Congressman Mo Brooks. ULA, along with many other space launch companies, has been reliant on the Russian-made RD-180 engine. Once the BE-3U and BE-4 can regularly be supplied to ULA and other launch companies, the United States will be one step closer to ending its reliance on Russia and Roscosmos.

“It is my belief that Madison County, Blue Origin, and ULA, our finest hour is still ahead. In Europe, we did some negotiations to ensure that when we replaced that Russian RD-180 engine that Madison County hands would be all over it when it was constructed, because just as we accepted the challenges from presidents in past days, we accept the challenge to do it in the days ahead. I welcome Blue Origin to the propulsion capital of the world, Madison Country, Alabama. We’re glad to have you here,” County Commission Chairman Dale Strong said.

After Blue Origin CEO Bob Smith announced the planned opening date of March 2020, there was still one thing left to add.

“I’m excited to announce that we’re in final negotiations, with Marshall Space Flight Center to do our acceptance testing of the BE-3 and BE-4 engines at test stand 4670, the historic site for testing Saturn V first stage and shuttle main engines. Blue Origin is all in on Alabama!” Bob Smith concluded.