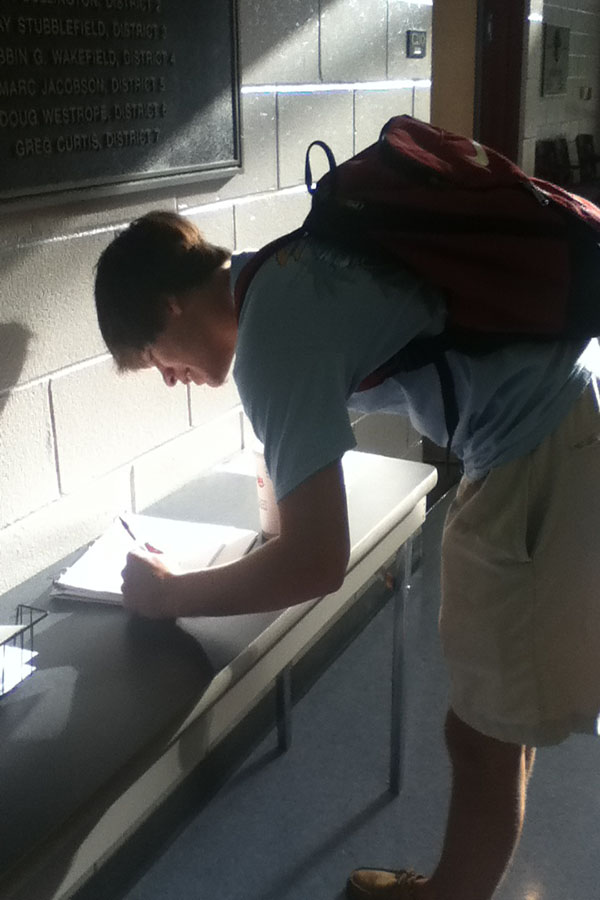 This week Bob Jones hosted a voter’s registration drive.  Students who attended no longer had to go to the board of registrar’s office to register to vote.   The registration process was now readily available at the school. You didn’t even have to be eighteen this year, as long as you turned eighteen by next year’s election, November 4th, 2014. Students were lined up in the front office from September 24th to the 26th every morning to become a registered voter.

The voter registration drive was a part of a national push by the High School Democrats of America.

Jordan Cozby, state-wide chairman of the Alabama High School Democrats of America, says, “By doing this registration, we save Bob Jones students time from having to go to the board of registrar’s office to register. For many, that hassle will prevent them from being able to vote. By doing registration within the school, we know students will be empowered and be more likely to vote.”

When asked what the Young Democrats Club is and what they do, Tyler Bullard, Bob Jones Young Democrats President, states, “As the BJHS Young Democrats Club, we are a chapter of the U.S. Young Democrats Association, which is a caucus of the Democratic Party. We are a group of students who are committed to representing our school, state, and nation as well as our party. Over the past couple of weeks, we have begun preparation for the 2014 Electronics by getting together and hosting a Voter Registration Drive.”

Tyler also adds that the voter registration drive really benefited the club members. Last year, after President Obama’s reelection, the club seemed to have lost that spark and many members lost interest.

“I think this gives [members] the opportunity to actually experience political volunteer work and know that we are here to get more people involved in this nation’s political world no matter what political affiliation they are with.”

Interested in playing a role in our country’s political sphere? Learn more about how to get involved with the Young Democrats Club by visiting Coach Travers in room S115.