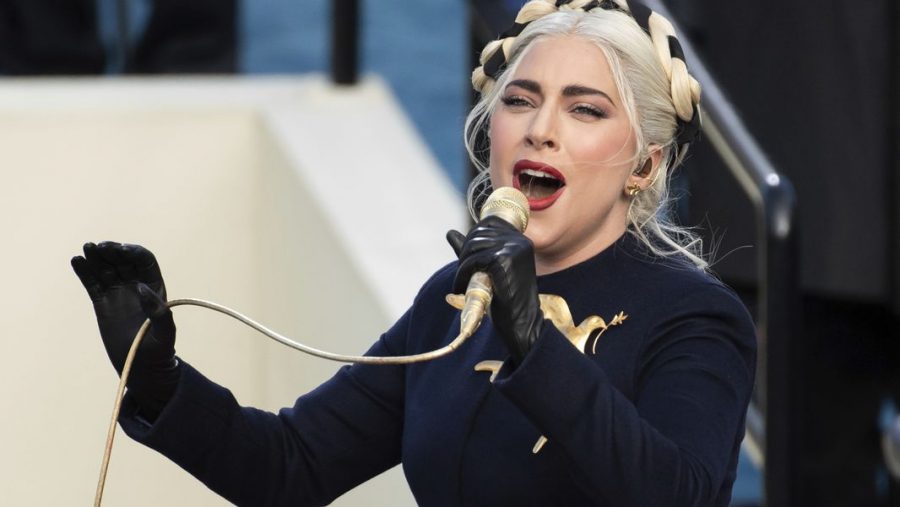 Lady Gaga preforming the National Anthem at the Inauguration Ceremony.

President Joe Biden and Vice President Kamala Harris were officially sworn into office during an inauguration ceremony, followed by a string of televised events featuring many celebrity appearances to celebrate the occasion. This format was new to inaugural events because of the COVID pandemic and also because of safety concerns.

Lady Gaga kicked off the event with an outstanding dramatized rendition of the National Anthem, in which she showed off her talent and amazing vibrato while still conveying so much emotion. Gaga has been known for putting a lot of emotion into her songs, and this performance was no different. Her rendition of the National Anthem brought many to tears and communicated how many feel during this period of change, going from Trump’s Administration to Biden’s.

“Singing our National Anthem for the American People is my honor. I will sing during a ceremony, a transition, a moment of change – Between POTUS 45 and 46. For me, this has great meaning.” She continued on Twitter, “My intention is to acknowledge our past, be healing for our present, and passionate for a future where we work together lovingly. I will sing to the hearts of all people who live on this land.”

Lady Gaga, a long time supporter of the Biden campaign, has previously performed in political events. One of her most notable performances of the Biden Campaign was during a “Drive-up” rally held in Pennsylvania this November, the day before the voting began.

“Thank you for asking me to perform.” Legend tweeted to the Biden Inaugural Committee. “It was so special to me to celebrate with the nation in front of the memorial to one of our greatest presidents. AND I loved honoring the late Nina Simone, my constant source of musical inspiration.” His performance also appealed to people’s emotions, as the lyrics also apply to the overall theme of the day: Hope for a better tomorrow.

Legend is also a long-time supporter of Joe Biden and joined Lady Gaga at his Pennsylvania rally on November 2nd to perform and deliver a speech in which he encouraged people to vote, and later on Twitter encouraged people to hit the polls to “end this national nightmare.”